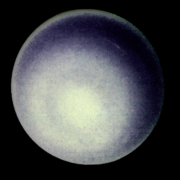 Who knew? Well, plenty of people presumably, but it was news to me when I came across this revelation on Facebook recently.

I love it though. For a fleeting moment, I imagined a world, or solar system, where Jupiter became Dave, and Mercury? Steve.

While it’s true that Sir William Herschel, who announced its discovery in 1781, named the seventh planet from the sun after his patron, King George III, he actually called it Georgium Sidus, or George’s Star (for those of us without a Latin O’ Grade).

Perhaps not surprisingly, this name wasn’t popular elsewhere in the world so alternatives were put forward, with the name Uranus, from Greek mythology, the eventual victor.

I love this kind of trivia, but what does it have to do with copywriting?

To be a talented copywriter you need an inquiring mind; some call it curiosity, I say it’s just being nosey.

Think about it this way: that knowledge, acquired by asking loads of questions and learning all the time, along with life experiences, makes it easier to come up with great copy ideas for relatable content.

So anyone who believes education ends when you walk out of those school, college or university doors for the last time should think again: it’s only just beginning.